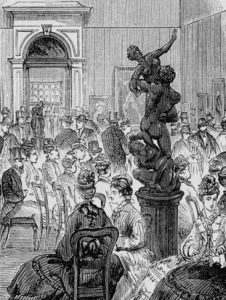 Giambologna (c.1529-1608; Flemish/Italian), after
The Rape of the Sabine Women
Marble, c.1.96 m high, including pedestal
Presented by the family of James Purves, 1878
Present location unknown

This statue is recorded as donated to the Melbourne collection in 1878, together with * Unknown (Italian, 19C?) Venus de’Medici (replica) {1878} Loc? [SC]. However, both statues appear to have been on loan to the NGV earlier. This work is clearly visible in an 1875 engraving of the opening of the Public Library’s new picture gallery (later the McArthur Gallery), rising incongruously above the crowd in their Victorian finery: detail as shown here.

This statue was evidently a reduced-scale replica of the original group (Loggia dei Lanzi, Florence, 1579-83), which is over 4 metres high.

Still listed in the 1943 NGV catalogue, this group no longer appears to be in the collection, although there does not appear to be any formal record of its de-acquisition.