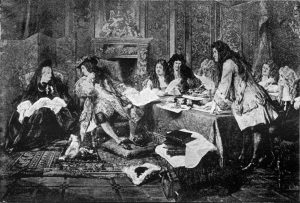 This large watercolour showed Louis XIV and his cabinet in the Versailles apartment of the king’s former mistress and second (“morganatic”) wife, Mme de Maintenon, who played a major behind-the-scenes role in state affairs.

The work was bought for a substantial sum from the British section of the 1880 Melbourne International Exhibition (as noted in AR 1881 and NGV 1905), and reproduced in both NGV 1894 and 1905. The 1905 catalogue also notes that it was first exhibited at the Society of Painters in Water Colours in London in 1872, when an engraving of it was published in The Graphic.

Gilbert, who was largely self-taught, enjoyed a high reputation in his day, becoming known as the “Scott of painting” for his numerous historical illustrations and paintings. He was knighted in 1872, and was elected a member of the Royal Academy four years later.

The Marquise de Maintenon (1635-1719) was Louis XIV’s mistress from the 1670s, and became his second wife in 1683/4, following the death of Maria Teresa (1638-83). Because of her lower status, Madame de Maintenon, as she became known, was never officially acknowledged as the king’s wife or the queen of France: for a detailed explanation, see e.g. http://en.wikipedia.org/wiki/Fran%C3%A7oise_d%27Aubign%C3%A9,_Marquise_de_Maintenon