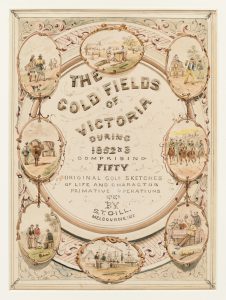 This second series of watercolours based on Gill’s 1850s gold rush images was produced 3 years after the first set commissioned from the artist by the Public Library (Gill The Victorian Gold Fields during 1852-3… 1869 {1869} SLV [WT]).

However, this second set was not acquired for the Melbourne collection until after the artist’s death.

Grishin (2015) suggests that this second series may have been intended to serve as the basis for a new series of lithographs, which did not eventuate. The title page, shown here, depicts a sequence of individual events, from hopeful prospectors arriving on the docks to diggers carousing in a saloon.

A complete sequence of reproductions is provided in the SLV’s online catalogue.

For full details and reproductions, see SLV online catalogue (the full series is listed under “Gill’s Gold Fields of Victoria during 1852 & 3 comprising fifty original gold sketches”). Grishin’s comment on the present series (as noted above) appears in his S.T.Gill (2015), p.206. For the artist’s original 1850s goldfields lithographs, see Grishin, pp.76ff.