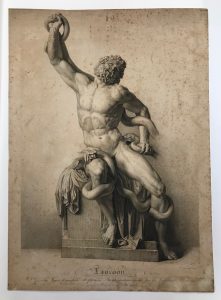 The Laocoön statue, based on the story of the tragic death of the Trojan priest and his sons (also recounted in book 2 of Virgil’s Aeneid), was already known through Pliny the Elder’s 1st-century description, identifying it as the work of Agesander, Polydorus, and Athenodorus, natives of Rhodes. After its discovery in Rome in 1506, it was frequently copied and reproduced. The pre-Felton collection also included plaster casts of the whole group (at reduced scale) and a bust of the central figure: see now Casts – I.Statues etc. (I.75) and Casts – II. Busts & heads (II.71).

Both the present engraving and the pre-Felton cast were based on the restored version of the Vatican group, with the upraised arms of all three figures completed by Montorsoli and others. Modern “re-restoration” has removed these speculative additions, and incorporated the fragmentary bent arm of the central figure, discovered in the 1950s. The group is now understood to be a late Hellenistic work from Pliny’s era, probably based on a Pergamene statue (possibly in bronze) from c.200 BC.

PF (1868); the current NGV catalogue lists this as by an unknown engraver after Reverdin, 1880 (not reproduced). Author’s ID photo shown here