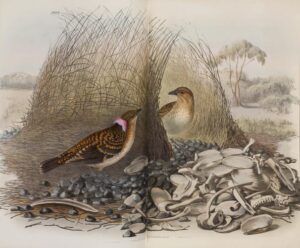 This impressive series, produced between 1840 and 1848, was dedicated to Queen Victoria, and supported by many other eminent donors and supporters, listed at the beginning of the first volume.

Redmond Barry included this title in his initial list of desiderata sent to Edward Barnard, Victorian Agent-General, in Dec.1853, for purchase through London booksellers (see Overell 1997). However, Barry subsequently arranged for the purchase of the volumes directly from Gould himself. C.A.McCallum (1956) describes it as “the first work of importance to be acquired by the Library.”

After their arrival, the volumes were freely available for consultation in the MPL, and show clear signs of frequent handling and repair – a measure of their early popularity.

The lithographed illustrations were produced by Gould in collaboration with various print-makers including his wife Elizabeth (1804-41). The prints are vivid and large-scale, often showing their subjects at true size (or somewhat smaller, in the case of the larger birds).

See SLV catalogue for details (not reproduced). The acquisition date of 1856 is provided by McCallum Public Library of Victoria (1956), p.88, as quoted above, noting the purchase price as £140. Many thanks to the SLV’s Rare Books librarian Des Cowley for his advice on the early history of the MPL collection (Dec.2020); Barry’s 1853 letter to Barnard is transcribed and discussed by Overell (1997)

For a complete digital reproduction of the National Library copy, see http://nla.gov.au/nla.aus-f4773). Two sets are also held by Museums Victoria, one purchased with a Government grant in 1975. See also Gould’s earlier publication The Birds of Australia, 2 vols., London, 1837 (material later incorporated into the present edition): and his Handbook to the Birds of Australia, London, 1865 (companion volume), both also held in the SLV