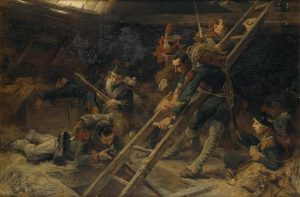 This gloomy representation of an episode from the Battle of Ligny (1815) shows French troops cornered by Prussian forces. The canvas is clearly in poor condition, and is not currently on display.

NGV 1894 describes the artist as devoted to portraying “scenes in soldier life,” and notes two paintings by him then in the collection of the Sydney gallery (both apparently de-accessioned by the AGNSW in 1996).

The Wikipedia article on the artist (cited above) incorrectly lists Gow’s A Jacobite Proclamation (acquired for Sydney in the year it was painted, 1882) as still in the AGNSW, but it was actually sold at auction by Sotheby’s in Melbourne in August 1996 (details in Australian Art Sales Index website: see http://www.aasd.com.au). The other work mentioned in NGV 1894 as in the Sydney collection (The Relief of Leyden, 1876) also appears to have been auctioned in 1996: see http://www.artprice.com/artist/44636/andrew-carrick-gow/lot/past/2384660/the-relief-of-leyden