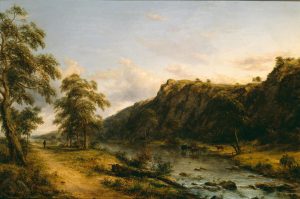 Both this work and von Guérard Valley of the Mitta Mitta 1866 {1866} NGV [PA] were donated by Michie in the year they were painted.

This work was one of several shown by Gritten in the Intercolonial Exhibition in Melbourne in 1866, when he was criticized by an un-named Argus writer for excessively “pre-raphaelitish” attention to the minutiae of foliage (by contrast with Buvelot) – an interesting demonstration of contemporaries’ detailed engagement with the changing stylistic climate in Australian landscape painting.