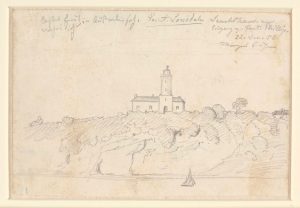 This remarkable group of drawings was purchased from London bookseller Frances Edwards, for only £30. The relevant correspondence between Edwards and Chief Librarian E.La Touche Armstrong (preserved in the Victorian Public Records Office) also mentions three small oil paintings of Melbourne by von Guérard, offered by Edwards at the same time but unfortunately not acquired.

Ruth Pullin (2014) identifies a number of these drawings as from the artist’s first three Australian sketchbooks (nos.XIX-XXI in the complete sequence of his sketchbooks), previously believed lost. The sketches, cut from the original books prior to 1903, are mostly small in scale, and typically in pencil on cream or blue paper. Other sketches cut from these books form part of the “Journal of an Australian Gold Digger by E.v.G.” (Dixson Library, State Library of New South Wales).

Following Pullin’s analysis, the drawings acquired for Melbourne in 1902 may be grouped as follows:

A number of these drawings were first published by Marjorie Tipping, An Artist on the Goldfields: the Diary of Eugène von Guérard, South Yarra, 1982/Melbourne UP, 1992