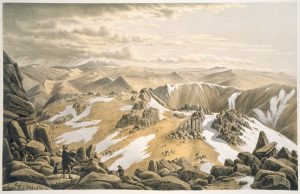 This series of prints was published by Hamel & Ferguson, Melbourne, to the artist’s instructions.

The full title reads: Eugéne von Guérard’s Australian Landscapes: a series of 24 tinted lithographs illustrative of the most striking and picturesque features of the landscape scenery of Victoria, New South Wales, South Australia & Tasmania; drawn from nature and lithographed by the artist with letter press description of each view (see below for details of individual prints)

Most of the plates were based on earlier compositions by the artist – for example, the print reproduced here references his well-known 1863 canvas now in the NGA, Canberra.

A complete second set (apparently no longer extant in the SLV or NGV, and not listed here) is recorded as acquired in 1869. Another set, bound in an album, was acquired by the NGV in 1959. Other sets are held in the NGA and elsewhere; and the artist’s own annotated proof copies are held in the National Library, Canberra.