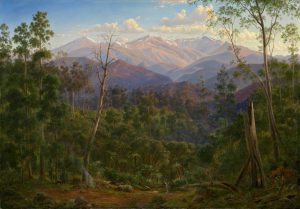 Like the artist’s well-known view from the summit of Mt Kosciuszko (NGA, Canberra, 1863), the present canvas was based on sketches he made during an arduous scientific expedition led by German scientist Georg von Neumayer in 1862.

The mountain was named in 1840 by Polish explorer Pawel Strzelecki, in honour of the Polish hero, General Tadeusz Kościuszko (1746-1817).

NB the Anglicized spelling Kosciusko was employed until 1997, when the Polish spelling Kosciuszko was officially introduced. The earlier name for this work, used in the pre-Felton records (and also inscribed by the artist on the NGA canvas), is retained by the NGV.

For the name of the mountain, and other historical and geographical details, see https://en.wikipedia.org/wiki/Mount_Kosciuszko (with further references)