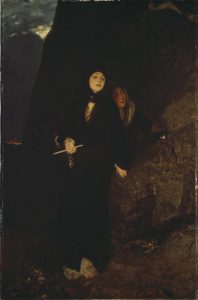 Greek by birth, Gysis (also known as Gyzis) spent much of his career in Munich, where he became professor at the Academy of Fine Arts in 1886; he produced a variety of genre and historical paintings.

A moralistic interpretation of the central figure as a “wayward young lady” doing penance was published in 1877, when the work was exhibited at the French gallery in London.

NGV 1894, by contrast, described it as showing “a Greek girl visiting a mountain holy shrine to offer her betrothal trinkets and to pray for her absent lover’s return.”

The 1877 comment (from the English Art Journal) is quoted in the NGV catalogue entry, which also notes that the work was purchased in Melbourne in 1884