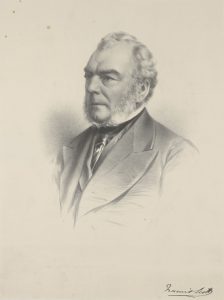 Numerous lithographed portraits by the Hanharts are preserved, especially in the National Portrait Gallery, London.

The lithographic firm founded by Michael Hanhart (1788-1865) was based in London: see http://www.npg.org.uk/collections/search/person/mp54755/m–n-hanhart