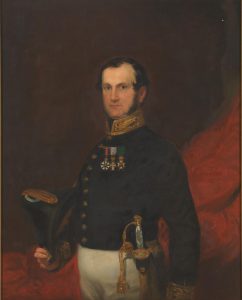 This work, listed in the 1885 annual report and NGV 1894 as by an unknown painter, is documented as the work of Hart, who was active as a portraitist in Victoria and Tasmania between 1850 and 1861. An 1858 review criticized his draughtsmanship, a problem also apparent in this rather wooden-looking portrait.

Jonathan Binns Were (1809-85) emigrated to Australia in 1838, and became one of the pioneers of the Brighton area, south of central Melbourne.  He was active in various arenas of Victorian public life – as stockbroker, president of the Chamber of Commerce, a member of various boards, a leading Church of England layman, and, briefly, a member of the Victorian Legislative Assembly (1856-7). He also held several consular posts, and was knighted by the kings of Sweden and Denmark, which may explain the uniform he wears here. His name lives on in the firm of JB Were.

For Were, see http://adb.anu.edu.au/biography/were-jonathan-binns-2783 (biography by Weston Bate, published in ADB vol.2, 1967; with further details and references)

For Hart, who died in India, see Kerr Dictionary (1992), pp.349-50 (with a detailed biography and references, including the 1858 review mentioned, in the Journal of Australasia); updated as http://www.daao.org.au/bio/conway-weston-hart/personal_details/