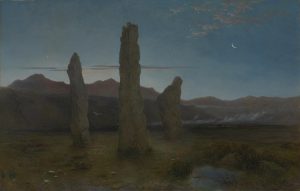 Arran, in the Firth of Clyde, is well known for its Neolithic monuments; the standing stones depicted here form part of one of the groups on Machrie Moor, recorded by James Bryce in 1861.

The artist also painted landscapes in Italy and elsewhere.

The details on Arran noted here are drawn from the Wikipedia articles on Arran, Machrie Moor, and James Bryce