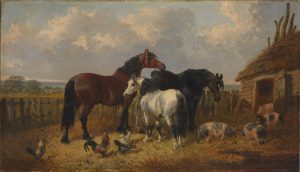 This barnyard scene, exhibited at the Royal Academy in 1864, was among the first paintings bought for Melbourne, and was apparently a popular work during the collection’s early years.

The artist was the son of John Frederick Herring, Senior (1795-1865), two of whose equestrian paintings were acquired for the NGV after 1905.

As Ann Galbally notes, the painting was initially mistaken for the work of the artist’s better-known father, whose style it resembles; it was still listed as Herring Senior’s work in the 1894 and 1905 NGV catalogues, and only attributed correctly some years later.

For further details on Herring Junior, see Bénézit 7, pp.8-9; AKL72 (2012), pp.370-71 (with biographical dates as shown here); and http://en.wikipedia.org/wiki/John_Frederick_Herring,_Jr. (discussing issues regarding his date of birth)