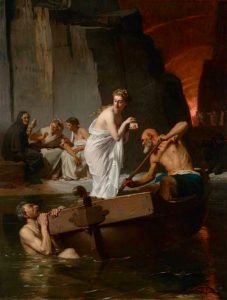 Hillemacher, a French academician, was made a chevalier of the Legion of Honour in the year this work was painted and shown at the Paris Salon. Psyche is shown venturing into Hades to obtain a dose of Proserpina’s beauty for Cupid’s mother Venus. Charon, steering the boat, and the Fates, on the shore, are easily recognizable.

The story of the union of Psyche (“soul”) and Cupid (“love”), told in detail by Apuleius in the 2nd century AD, was interpreted in allegorical fashion in the Middle Ages and the Renaissance.

But this image of Psyche’s final trial takes the form of a vivid pantomime, presumably comparable with various tableaux vivants of the story staged in France and elsewhere (including Australia) during the 19th century.