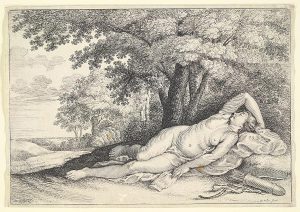 This print, bought for a small sum, is foxed. NGV 1905 describes it as drawn and engraved by Hollar alone, but the current NGV catalogue indicates that it was made by Hollar and Paulus Pontius.

Hollar was a prolific printmaker; the NGV catalogue lists over 100 further prints by him, acquired after 1905.

The NGV catalogue provides details and reproduction as noted above, listing it as the second of two states; with refs.: Parthey 277; Pennington 277 1/ii)