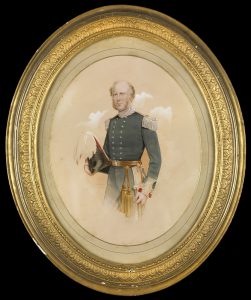 This is one of two framed oval portraits of Daly (Governor of South Australia, 1862-68), both listed in the “Oval Portrait” series of colonial governors in the 1894 NGV catalogue. The other is a coloured photograph by John Botterill, dating from about 1869, and commissioned for the Melbourne series in 1874 (SLV H1519).

Only one of these two portraits of Daly was catalogued in NGV 1905, but it seems impossible to be sure whether it was this work or Botterill’s, which shows the sitter as an older man, half length, and with a fuller beard.

The SLV suggests that the present portrait depicts Daly during his previous period of diplomatic service in Canada (1841ff.). Indeed, it closely resembles a photograph of Daly reproduced on the current website of the Canadian province of Prince Edward Island, where he was Governor from 1854 to 1859, shortly before his appointment as Governor of South Australia (see references below).

It should be observed that unlike most of the other oval portraits in the library’s series, including Botterill’s portrait of Daly, this particular example is of significant artistic quality, and does not appear to have been simply painted over an underlying photograph.

John Hood migrated to Adelaide in 1863, and worked as a professional photographer and portrait painter. Later (1883), he appears to have transferred his practice to Sydney, where he worked on the Picturesque Atlas of Australasia.

The Prince Edward Island photograph of Daly is reproduced on the current website of the province: see https://www.lgpei.ca/former-governors/dominick-daly (accessed 13 July 2020)