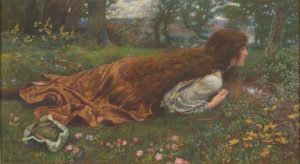 This watercolour, one of the most significant of the group recommended by the RA in 1901 (for details, see Watercolours – Introduction), was bought for the substantial sum of £157/10.

A finely-crafted work, it revisits Pre-Raphaelite themes in a delicate fin-de-siècle vein, and was accompanied at the summer 1901 RWS exhibition by a quote from Keats’ poem Endymion (as noted by Benson 2015).

The artist was the nephew of Arthur Hughes (1832-1915), and studio assistant to the ageing William Holman Hunt (1827-1910), achieving fame in his own right for works such as the 1912 watercolour Night with her Train of Stars (Birmingham Museum and Art Gallery). A retrospective of his work was mounted by the Birmingham Museum in 2015.