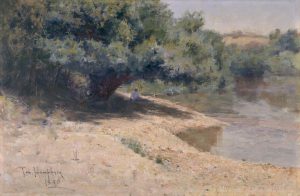 Humphrey, a lesser light in the “Heidelberg School” firmament, nevertheless produced several key examples of Australian Impressionism, notably On the way to school, acquired by the Warrnambool Art Gallery in 1888, and Summer walk (c.1888), donated to the NGV in 1979. In the 1890s, he rented one of the Charterisville cottages from Withers, and also painted with Tudor St George Tucker, McCubbin and others (see relevant entries for these various artists).

This particular canvas was purchased from the Victorian Artists’ Society (along with other local landscape paintings by Mather, Withers and others: again, refer separate entries).

The original wide-format frame made by Melbourne frame-maker John Thallon in 1898 was refitted to the canvas in 1985, after being found in storage (refer the NGV’s online catalogue for a good photograph and further details).