In NGV 1894, this work was catalogued with an accompanying quote from Sir Walter Scott regarding “proud Bamborough,” and noted as then on loan to the Bendigo Art Gallery. It was still listed as part of the NGV collection in 1943.

Hunt was a respected landscapist inspired by Turner in particular; his works are held in the Tate Gallery and elsewhere, and a major survey exhibition of his work was held at the Yale Center for British Art in 2004. Several of his extant watercolours show the dramatic Northumbrian castle now known as Bamburgh; and a famous Turner watercolour of the site (long thought lost) reappeared at auction late in 2007. 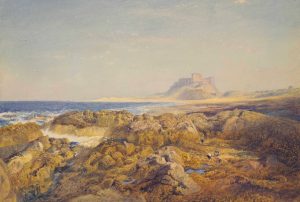