Hymans, besides being a print-maker, was also an art historian and curator of prints at the Bibliothèque royale in Brussels.

Induno studied at the Brera Academy in his native Milan from 1839-46 and then became heavily involved in the struggle for Italian independence, serving under Garibaldi; he painted both military and genre scenes. 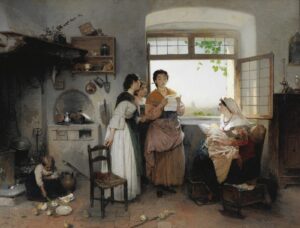 The title listed here may be translated as “women of Rome.” While there is no obvious identification, a painting by Induno auctioned by Skinner (Boston) in 2005 as “Hearing the news of the day” (also noted elsewhere as dating from 1864 and also titled A letter from the front or Donne romane) may be relevant: see photo reproduced here.