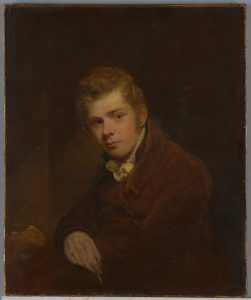 Bought for a small sum, this work was regarded initially as a self-portrait by the noted Scottish painter David Wilkie (1785-1841), and was still catalogued as such in 1894.

However, in 1905 the listing was changed to “attributed to [Wilkie],” a view maintained in subsequent NGV catalogues through to 1948.

In her revised NGV catalogues, Ursula Hoff initially listed the work as “British School, early 19th century” (1961 and 1967), but subsequently, following expert advice received in 1971, attributed it to Wilkie’s friend Jackson (Hoff 1972 and 1995).

The NGV’s Annual Report for 1877 and the current NGV catalogue list the work as received in December of that year, although other sources give the acquisition date as 1878. Hoff (1995), p.174, includes a small black and white reproduction, and further details and references, citing previous NGV catalogues, and noting her own change of attribution to Jackson, following advice from Ellis Waterhouse and Professor H.Miles