Kauffmann (also known as Kaufman) was a noted Neoclassical painter who worked mainly in London and Rome. Other works by or after her, acquired after 1905, are held in the NGV.

Unfortunately, however, the present work, like the other Old Master drawings recorded as donated by Montefiore in 1869 (see e.g. * Bartolozzi [attrib.] Study of Figures {1869} Loc? [DR]), no longer appears to be in the collection.

NGV 1905 describes it as a “medallion 8 in.in diameter,” suggesting that it may have been related to other circular compositions by Kauffmann, including “The Graces awakening Cupid” (based on an antique mural?), and an engraving of “Cupid disarmed by the Graces” (reproduced below). Further investigations may prove productive. 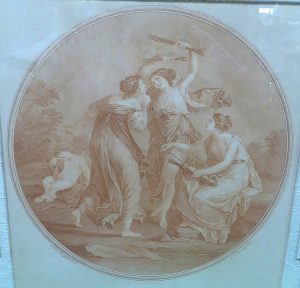 For the other works by or after Kauffmann in the NGV, see https://www.ngv.vic.gov.au/explore/collection/artist/5182/