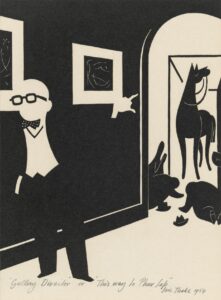 A member of a talented and influential Victorian family, Daryl Lindsay was the younger brother of artists Lionel Lindsay (1874-1961) and Norman Lindsay (1879-1969).

Lindsay, by contrast, was sympathetic to the art of his own time. He was close to Sir Keith Murdoch, the influential newspaper proprietor who financed the 1939 Herald Exhibition which introduced Melbourne audiences to the work of Picasso, Matisse, Braque, Dali and other modern artists. McDonald refused to allow the exhibition to be shown in the NGV, deriding the modern art it included as the work of “degenerates and perverts” (see Chanin & Miller 2005, as cited below).

Immediately after becoming Director, and now with Murdoch’s influential support as President and Chairman of the NGV Trustees (1939-52), Lindsay set about bringing what many agreed was a much-needed new broom to the institution, including the reversal of his predecessors’ opposition to acquiring progressive modern art.

Lindsay also has a deserved reputation for introducing new levels of professionalism at the gallery, and insisting that the collection ought to have its own home, thus laying the groundwork for the eventual transfer of the NGV to St Kilda Road in 1968. Eric Thake’s 1954 linocut (reproduced above) is a witty comment on Lindsay’s dissatisfaction with the mingling of gallery and museum exhibits and audiences during his period in charge.

In retrospect, though, his energetic campaign to de-acquisition significant quantities of art acquired for Melbourne in the previous 75 years or so (a process actually initiated in the late 1930s by MacDonald) was destructive to the character and quality of the collection as a whole, especially in the area of sculpture and decorative arts: for further details, see 1943 auction of NGV sculpture and Decorative Arts – Introduction. Substantial numbers of Victorian-era watercolours were also de-accessioned at his orders (refer individual entries for further details).

Lindsay continued his involvement with the gallery after 1956, writing a short history of Felton Bequest in 1963.

An excellent combined biography of the Lindsays by Bernard Smith was published in volume 10 of the ADB (1986): see http://adb.anu.edu.au/biography/lindsay-sir-ernest-daryl-7759 (with further references). See also Cox NGV (1970) and Poynter Mr Felton’s Bequests (2003/2008): refer indices; and Lindsay’s own book The Felton Bequest (Melbourne, 1963)


Significant critical remarks on Lindsay’s de-acquisition policies have been published in the past: see in particular Galbally First Collections (1992) and Lane Decorative Arts (1980)