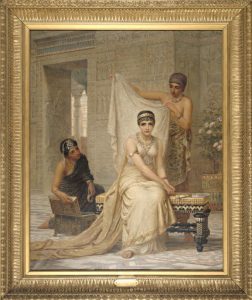 This work is typical of the artist’s popular Orientalist later style. The 1894 NGV catalogue gives extended attention to the iconography and archeological detail, based on the Book of Esther and other ancient texts, noting that even the frame, made to Long’s design, quotes decorative details from ancient Persepolis.

Commissioned from the artist for the substantial sum of £1,600, this is a slightly larger variant of a work exhibited at the Royal Academy in 1879.

NGV 1894 and 1905 plainly describe the NGV canvas as a “replica.” However, Ted Gott (2003) quotes Long’s own 1879 explanation that, although the two versions were painted simultaneously, they are not identical, varying slightly in proportions and certain details.

The subject is drawn from the Apocryphal First Book of Esther, and shows her preparing to visit the Persian king Xerxes to plead for the salvation of the Israelites.


The RA version is said to be in the Pérez Simón Collection in Mexico City, but this has yet to be confirmed: see now  https://en.wikipedia.org/wiki/Queen_Esther_(painting) (accessed 14 July 2020)