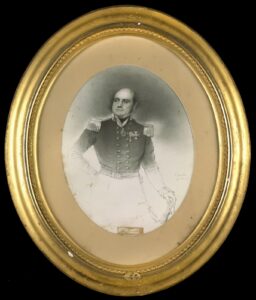 Franklin (1786-1847), famous as an Arctic explorer, joined the navy in 1800, was a crew member on Flinders’ circumnavigation of Australia in the Investigator in 1802, and fought at the Battle of Trafalgar in 1805. During the 1810s and 20s, he led expeditions to Canada and the Arctic, and was then Lieutenant Governor of Tasmania from 1837-43. In 1845, aged 59, he embarked on a new Arctic expedition, which resulted in the successful discovery of the long-sought North-West Passage, but led to his death.

By 1869, this print had been re-used for the Oval Portrait of Franklin reproduced here, photographed in the “Works of Art” exhibition held at the MPL.

A second impression, no longer extant, was donated to the pre-Felton collection in 1875: see now * Maguire after Negelen Sir John Franklin (c.2) {1875} Loc? [PR]. There are other impressions elsewhere.

For Franklin, see http://adb.anu.edu.au/biography/franklin-sir-john-2066 (biography by Kathleen Fitzpatrick, first published in ADB vol.1, 1966, focussing on his term as Tasmanian governor) and https://en.wikipedia.org/wiki/John_Franklin (a detailed and well-referenced account). For Maguire and Negelen, see Bénézit 9, p.42, and 10, p.222 respectively (neither artist is listed in AKL)

For another impression of this print, see http://www.npg.org.uk/collections/search/portrait/mw197296/Sir-John-Franklin?LinkID=mp01669&search=sas&sText=John+Franklin&OConly=true&role=sit&rNo=5