This satirical drawing, published on the front page of The Bulletin, 17 March 1888 (as reproduced below), shows a swagman puzzled by the assorted policies (“No coolies”, “University”, “No rabbits”, “Australia for the Australians”, etc.) making up the electoral platform of Samuel Walker Griffith (1845-1920), then premier of Queensland. 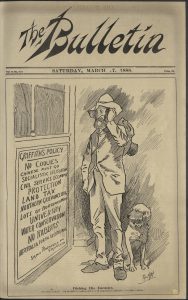