“Selected by the Director, in Sydney, in 1903,” according to NGV 1905, describing the image as “a portrait of Dean (Monsignor) O’Shea.” This caricature was published on the front page of The Bulletin, 15 March 1890 (as reproduced below).

The exact identity of the figure represented has yet to be established. However, he may be Dean Thomas O’Shea, later mentioned in the Catholic Press (Sydney), 22 May 1913, as the popular Irish-born Vicar-General of Wellington, recently appointed Coadjutor-Bishop of that Diocese. 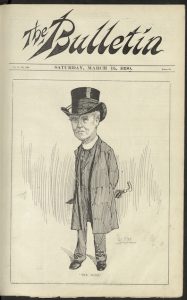 For the original drawing, see SLV online catalogue (not reproduced)

The 1913 reference to Thomas O’Shea is available through Trove