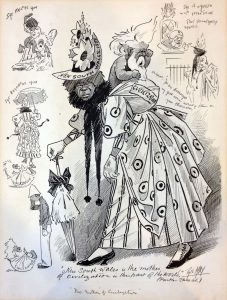 The title below this caricature, published on the front page of The Bulletin, 18 February 1888, reads: “‘New South Wales is the mother of civilization in this part of the world’ (Parkes’ speech).”

The main figures are New South Wales, depicted as a grotesque, negligent mother (apparently Aboriginal or West Indian in appearance), and the NSW premier of the day, Sir Henry Parkes, as her unfortunate offspring, wrapped in cloth labelled “Civilization.”

Several smaller sketches spelling out the narrative are captioned: “She wallops him”; She abandons him”; and, in the final sketch in the sequence, at top right, “She is charged with infanticide but triumphantly aquited” {sic}, the judge pronouncing: “You are discharged my good woman without a stain on your character.”