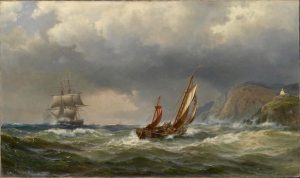 The gallery’s 1871 annual report gives the title as “The Storm – Start Point Light”; and NGV 1894 notes that Start Point is “the spot last sighted by vessels outward bound from the [English] Channel.” The 1905 NGV catalogue indicates that the painting was purchased in Melbourne.

The artist, who specialized in seascapes, was born and died in Denmark, but also worked in England and throughout continental Europe.