This was one of several engravings of Sydney bought together for the NGV in 1891, none of them, apparently, still in the collection: see e.g. * Carmichael Sydney Cove, from Fort Philip 1838 {1891} Loc? [PR].

The 1894 NGV catalogue lists this print as by an unknown artist, but Moffitt is clearly identified in an engraved inscription at the lower right.

William (Billy) Blue (c.1767-1834), of Jamaican origin, was transported to Sydney in 1801 for stealing sugar. After serving his sentence, he married, and was later appointed harbour watchman and constable by Governor Macquarie (1811), enabling him to purchase a house on Bennelong Point, overlooking the harbour, dubbed “Billy Blue’s Cottage.” Later, according to his ADB biographer, he survived several “brushes with the law,” ran a ferry service to the north shore of Port Jackson, and took to wearing top hats and a mock naval uniform, leading to his being known as “the Old Commodore.”

Transported to Sydney in 1827 after stealing tea, Moffitt subsequently set up as a stationer, bookseller and engraver. By the 1840s, he had become extremely successful, and served as an alderman of the city of Sydney from 1849-53. Some years after his death (at which he left a substantial estate), his business was purchased by Penfold & Co., stationers and printers. None of his engravings is in the SLV, but several, including another impression of the present plate (reproduced here), are in the State Library of New South Wales.

[photo: comparative impression in the State Library of NSW] 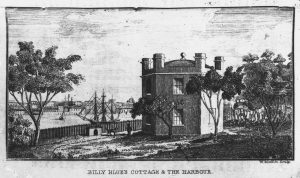 For Billy Blue and his cottage, see http://adb.anu.edu.au/biography/blue-william-billy-12804 (by Margaret Park, in ADB, Supplementary volume, 2005), including further references, and a reproduction of an 1834 portrait of him by J.B.East, held in the Mitchell Library. For East, see Kerr Dictionary (1992), pp.238-39 (entry by Candice Bruce), also reproducing the Billy Blue portrait, his “major known work”