Moloney after Murillo Virgin of the Rosary {1870} NGV [PA] 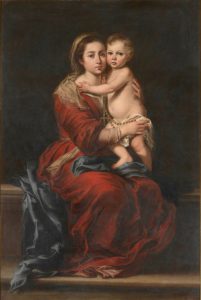 The commission of this copy of Murillo’s Prado original reflected early efforts to obtain good Old Master copies for Melbourne. Thomson, writing to Redmond Barry in 1869, described Moloney as an excellent copyist living in Madrid.

According to Leonard Cox, however, both Thomson and the Melbourne Trustees were disappointed with the outcome, Thomson complaining about poor packing of the work.

The frame, by James Bourlet, London, is contemporary with Moloney’s painting, according to the NGV catalogue.

Nothing else appears to be known about Moloney. For Murillo’s Prado canvas of c.1650, see e.g. https://commons.wikimedia.org/wiki/Category:The_Virgin_of_the_Rosary_(Murillo,_Prado); there are variants in the Pitti and elsewhere