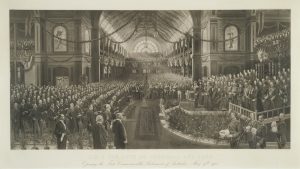 
The SLV holds several impressions of this work, a photogravure print produced by the Paris firm of Goupil & Cie, and advertised with the enterprising slogan “No Australian Home will be complete without a Copy.”

The example purchased in 1903 presumably corresponds with one of the SLV impressions.

Nuttall’s original monochrome painting, measuring 2.3 by 4 metres, is held in the Melbourne Exhibition Building, where the event depicted took place in 1901. It  was also commemorated in Tom Roberts’ even larger “big picture,” completed in 1903, and now on permanent loan to the Parliament of Australia from the British Royal Collection.

For Tom Roberts’ Opening of the First Parliament of the Commonwealth of Australia by H.R.H.The Duke of Cornwall and York (later King George V), May 9, 1901, 1903 (oil on canvas, 3.6 x 5.65 metres), see e.g. http://www.aph.gov.au/Visit_Parliament/Parliament_House_Art_Collection/Tom_Roberts_Big_Picture