Bought from the Anglo-Australian Exhibition, Melbourne, this work was still in the NGV in 1914-15, when it was listed as on loan to the Maryborough and Mildura councils respectively. By 1950, however, it had been identified as surplus to requirements.

The artist was a member of the Royal Society of Painters in Water Colour. His work was evidently quite conventional, to judge from a watercolour portrait of a young woman with a basket of eggs, auctioned in England in 2007 (reproduced below). 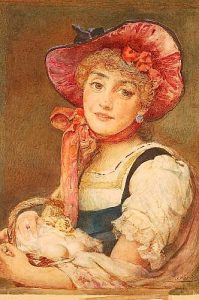