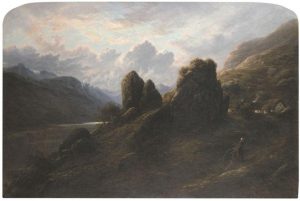 The NGV still holds another canvas by Paton also purchased in 1882 (refer separate entry), but the present painting was de-accessioned in 1941, and was last seen at auction with Sotheby’s in London in 2006. Admittedly, it does look somewhat drear, to judge from the Sotheby’s photograph reproduced here.