This landscape was bought in Melbourne for a substantial sum, but subsequently de-accessioned. 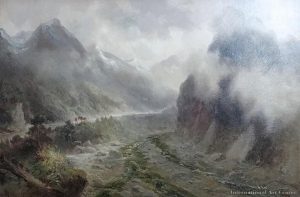 For details of other auctioned works by Peele, see Bénézit 10, pp.1073-74 and http://www.aasd.com.au/index.cfm/list-all-works/?concat=PeeleJames (including several other views of Otira Gorge; the canvas reproduced here was auctioned at the International Art Centre, Auckland, on 22 July 2015, selling for NZ $10,638 inc.buyer’s premium)