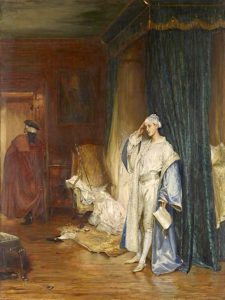 The 1905 NGV catalogue suggests that another version of the present painting, “presumably a replica,” was exhibited at the Royal Academy in 1885. But the catalogue of Pettie’s paintings by his nephew Martin Hardie (1908) indicates that the work shown at the RA was the NGV picture itself. Hardie adds however that a slightly smaller replica by Pettie (in the Fairfax Rhodes collection in 1908) was shown at the Glasgow International Exhibition in 1888 and at the RA’s winter 1894 exhibition.

Hardie describes the scene as taking place in the era of James II, and quotes the following lines (spoken by Cassio in Shakespeare’s Othello, Act 2, scene 3): “I remember a mass of things, but nothing distinctly; a quarrel, but nothing wherefore. O God, that men should put an enemy into their mouths to steal away their brains!”

This painting was later (1932) the subject of an essay by noted Australian Baptist preacher F.W.Boreham (1871-1959), who reflected that “…the whole artistry of the picture is concentrated in the face. It is the face of a thoughtless, shallow, self-indulgent young man-about-town suddenly startled to gravity and something like nobleness… No person amounts to much until all their faculties have been challenged.”

A prodigious commentator on religious and moral matters in Australia from 1910 onwards, Boreham was visited by US evangelist Billy Graham during the latter’s visit to Melbourne early in 1959 (shortly before Boreham’s death). The comments quoted here suggest that Boreham could be seen as a precursor of the famous TV commentator on visual art, Sister Wendy (1930-2018), albeit of a different religious inclination.

For the details noted from Hardie’s John Pettie, London: Adam & Charles Black, 1908, pp.124 (text) and 246 (catalogue), see the Google Books reprint, https://archive.org/stream/johnpettierahrs00hardgoog/johnpettierahrs00hardgoog_djvu.txt. For another, more conventional painting of the prelude to a duel by Pettie, titled The challenge, see http://www.artnet.com/artists/john-pettie/the-challenge-0JL2mA_QeMeaE5C01JBpCA2 (date of auction not listed; as measuring 55 x 81 cm)