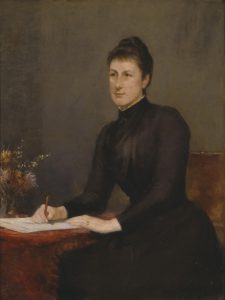 The sitter (1848-97), a successful novelist in her day, is depicted here as the “New Woman” of the late 19th century, as Brenda Niall observes (2007). Born Jessie Huybers, she emigrated to Tasmania in 1853; after an unsuccessful first marriage, she travelled extensively in Europe, marrying Belgian journalist and politician Auguste Couvreur in 1885.

Writing as “Tasma” (a pseudonym chosen to honour the state where she grew up), she produced several popular novels during the late 1880s and 90s, the first of which, Uncle Piper of Piper’s Hill (1889), set in Victoria, is said to be her best.

This portrait was presented by the sitter’s brother.

NGV 1905 lists the artist’s name as Madame Franz Philippson. She was married to a prominent German-Belgian banker.

For information on both the sitter and the artist, see SLV online catalogue and SLV, Art of the Collection (2007), pp.44-45 (comments by Brenda Niall), both with good reproductions. See also http://adb.anu.edu.au/biography/couvreur-jessie-catherine-3270 (biography by Raymond Beilby, published in ADB vol.3, 1969); and, for the artist, Bénézit 10, p.1328 (as Mrs Franz Philippson; listing the present work)