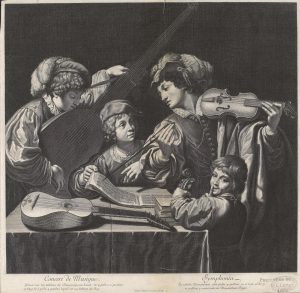 Picart’s engraving, one of the original group of 22 Tableaux du roi published in 1677, includes an inscription identifying the source as a painting by Domenichino.

The NGV catalogue, illustrating this rint, lists it as by an unknown artist after Domenichino. Cf. Suite et Arrangement (1727), p.2; and Duplessis Cabinet du roi (1860), p.6.