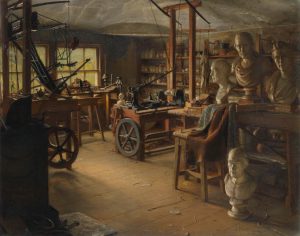 Pratt was a genre painter and portraitist who worked in Birmingham – also the domicile of the donors of this painting, according to NGV 1894. The NGV’s online catalogue suggests that the work was probably painted for the donors.

Watt (1736-1819) is famous for perfecting the steam engine, fundamental to the Industrial Revolution. This painting depicts the workshop he set up at Heatherfield Hall, near Birmingham (transferred in 1928 to the Science Museum, London, which also holds another version of the present painting).

For the artist, see Bénézit 11, p.340, and http://goldenagepaintings.blogspot.com.au/2008/08/jonathan-pratt.html. For Watt, see http://en.wikipedia.org/wiki/James_Watt (a detailed entry)