The two watercolours acquired for the pre-Felton collection were presumably typical of Provaggi’s tourist output. They were bought at the same time as views of Rome by Campi. 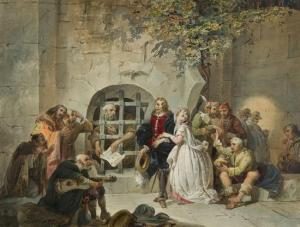 Other examples by Provaggi, still changing hands on the European art market for modest sums, are slight, washy, illustrative genre pieces. An example is reproduced here.

For other examples by Provaggi (who is not listed in either Bénézit or AKL), see e.g. http://www.artnet.com/artists/cesare-provaggi/past-auction-results and http://www.arcadja.com/auctions/en/provaggi_cesare/artist/142909/ (including the work reproduced above, a watercolour measuring 23.3 x 29.4 cm, auctioned by Bloomsbury vRoma, 22 May 2012, lot 63)