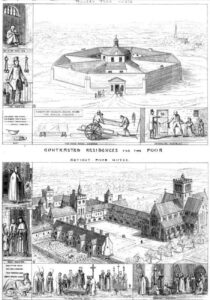 Pugin, Augustus Welby (1812-52; English)
Contrasts: Or, a Parallel between the Noble Edifices of the Fourteenth and Fifteenth Centuries and Similar Buildings of the Present Day, Shewing the Present Decay of Taste (London: Charles Dolman, 1836)
Purchased 1857
State Library of Victoria [RARESF 720.942 P96]

Pugin’s first significant publication was a powerful diatribe against the architectural and social tendencies of the day, as its title plainly indicates. It provided an influential model for like-minded successors such as William Morris.

[photo: Contrasted Residences for the Poor (from another copy)]