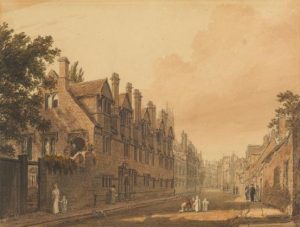 This picturesque view, now unfortunately somewhat yellowed, reflects the taste of the artist, best known as a Gothic Revival architect and polemicist.

His Contrasts (1836) adversely compared utilitarian architecture of his own day with medieval Gothic. Numerous neo-Gothic churches were built to his designs, including several in Australia. He was also responsible for much of the interior design of Charles Barry’s new Houses of Parliament in London (1840ff.), and designed Elizabeth Tower (“Big Ben”) shortly before his death.