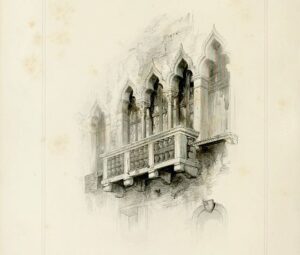 This famous book was written when Ruskin was in his early thirties, and illustrated with a number of engravings based on his own designs. His partisan preference for medieval over classical style dictates much of the argument.

The text covers Venetian architecture from its beginnings through to the later Renaissance, and includes Ruskin’s essay “The Nature of Gothic,” a fine interpretative account of the style in general.

The State Library also holds another copy of the first edition, donated in 2017.

For further volumes by Ruskin acquired in the 1850s-60s, see Appendix: Other significant books acquired for the Melbourne Public Library to 1861.

[reproduction: Pl.XI: Windows of the Fourth Order (engraving by J.C.Armytage after Ruskin)]

See SLV catalogue for full bibliographic details (also listing the copy donated in 2017). Among many modern reprints and editions, the 2001 Folio Society edition is noteworthy, including an eloquent introductory essay by Jan Morris, and additional reproductions of several of Ruskin’s own evocative watercolour drawings of 19th-century Venice