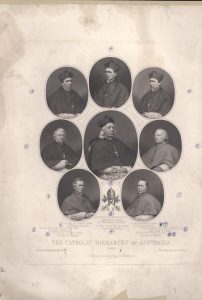 Sadd migrated from England to New York in 1840, according to Bénézit (where he is described as American). He may also have worked in partnership with a Canadian photographer named Andrew Halsey (documented in Montreal and Mexico in the 1840s).

He arrived in Sydney in 1853, and by 1855 had settled in Melbourne, specializing in mezzotint portraits based on photographs, as is the case here (the inscriptions indicate that the print relied on photos taken by a certain A.McDonald). Hand-written numbers identify the sitters, including, at centre left, James Goold, Catholic Bishop of Melbourne, the donor of several canvases to the Melbourne in the 1860s (for details, see linked entry). The central figure is John Bede Polding, Archbishop of Sydney and Metropolitan of Australia.

In an ecumenical spirit (?), this print was apparently acquired at the same time as another – apparently no longer extant or identifiable – of the Australasian Wesleyan Methodist Conference (Melbourne, 1864); but whether that was a print or a photograph is uncertain.