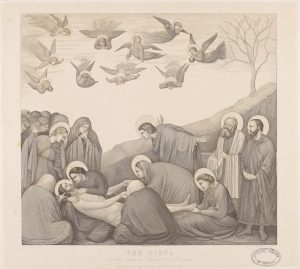 This print, engraved for the Arundel Society (as noted in the inscription), demonstrates Melbourne’s relatively up-to-date interest (in 1860) in the 19th-century revival of the “Italian primitives,” best known through the work of the Pre-Raphaelite Brotherhood. Schäffer was the engraver, and Belloli the draughtsman.

A considerable number of further prints and reproductions of medieval and Renaissance art produced by the Arundel Society were acquired for the Melbourne collection during the succeeding decades – most of them chromo-lithographic reproductions not catalogued separately here: for discussion and further details, see Inglis “Art at Second Hand” (1988) (full details in Bibliography).