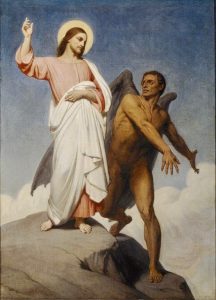 Scheffer, who worked in Paris, was known mainly for religious images of this simplified neoclassical type. Later, the NGV acquired his Christ and the Maries (also painted in 1854) and Marguerite and Faust in the Garden (1846).

See Hoff (1995), p.271, with references and further details, also including information on the Louvre painting, and other replicas in Liverpool and elsewhere; and Gott 19C (2003), p.36 (entry by Laurie Benson).