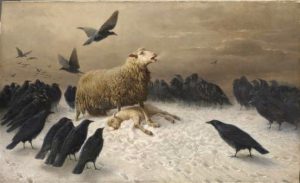 This large painting was first shown in the 1878 Salon in Paris, where the artist spent most of his career.

Derided by many 20th-century commentators as irredeemably sentimental – Murray (2011) quotes Robert Hughes’ phrase “soggy with moral uplift” – this work has been re-assessed in recent years, as concepts such as emotion and empathy are given increased attention by historians and critics alike.

For Irena Zdanowicz (2007), for instance, it exemplifies the long tradition of drawing “parallels between human and animal behaviour and appearance.” The scale of the picture also reinforces the idea that the ewe’s protection of her dead lamb from the encircling crows has wider human implications, to do with love, grief, and, above all, compassion – as Alain de Botton and John Armstrong emphasized recently.

In 2013, the work was the centrepiece of Patrick Pound’s installation “The Gallery of Air” (shown in the Melbourne Now exhibition at the NGV), drawing particular attention to the breath issuing from the mother’s mouth as she cries out in despair.