This print, based on Phillips’ 1807 portrait of Blake, appeared as the frontispiece to the 1808 edition of Robert Blair’s poem The Grave, for which Schiavonetti prepared engravings based on Blake’s designs.

The print catalogued in NGV 1894 and 1905 no longer seems to be in either the NGV or SLV. But other impressions are included in two editions of The Grave acquired by the NGV in 1954 and 2010: see comparative photo reproduced below.

Original works by Blake (1757-1812) first entered the Melbourne collection in 1918, with the spectacular purchase of over 40 Blake watercolours (notably a suite of his Dante illustrations) through the Felton Bequest (advice of Robert Ross). The Dante and Job watercolours in the NGV were originally commissioned by John Linnell. 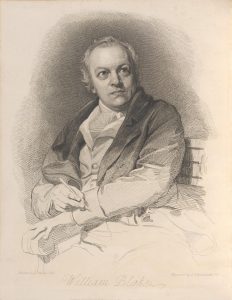